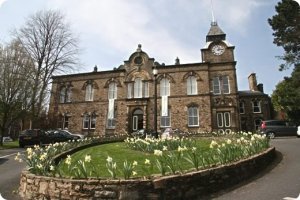 Town Hall: The Town Hall stands in a prominent position at the junction of Spring Bank and Hall Street and its building costs were raised entirely by public subscription. Originally called the Public Hall it was opened in 1871 by the 7th Duke of Devonshire. The Tower was added in 1875 and the clock and chimes were installed. The library was added in 1910 when New Mills was one of the smallest towns in Derbyshire to operate a free library.

The Town Hall in addition to housing the Town Council's offices and Council Chamber, is used by other public services including the Registrar and Citizen's Advice. In 1997 the addition of a footbridge and disabled parking area to the main hall allowed for greater access to the building.

Football ptiches are provided at Newtown and Bakehurst recreation grounds, and there are other playing fields and open spaces throughout the area, many with children's playground equipment.

Heritage & Information Centre: The centre was opened in 1989 and is housed in a converted stone building behind the bus station. It includes a display area which often exhibits works by local artists, as well as a shop selling local history publications, maps and light refreshments. A scale model of the Torrs and a lifelike mine add to the attractions. Outside the centre there is a viewing platform offering excellent views of the Torrs.

The centre is fully accessible for disabled people. Admission is free and the centre is open daily (except Mondays) and Christmas Day from 10:30am till 4:00pm> further information can be obtained on 01663 746904. 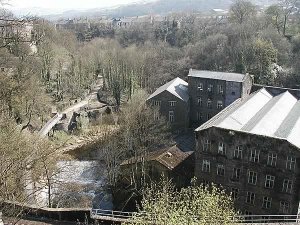 The Torrs: The Torrs is the natural gorge through which the old highway from Newtown to New Mills crossed the town at river level before the opening of the Union Road High Level Bridge in 1884. The Torrs is an important industrial archaeological site of the late 18th century and the ruins of the old mills and cottages can be seen along the banks of the rivers. 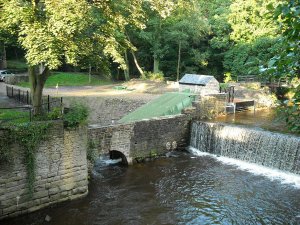 The Archimedes Screw: On the site of the Torr Mill, which was destroyed by fire in 1912, now stands a 12 tonne revers Archimedes screw capable of producing 63 kilowatts of electricity - the screw itself is sited in exactly the same position as the original waterwheel that powered the original mill back in the 19th century.